5 things to know about the LPWAN market in 2021

IoT Analytics recently published the LPWAN Market Report 2021-2026 and found that despite the impact of the COVID-19 pandemic and the chipset supply shortage, the LPWAN market enjoyed strong and steady growth in 2020 and 2021.

At this point, the market is even becoming a major driver for the growth of the nearly 13 billion IoT connections globally—as IoT Analytics highlighted in the State of the IoT Report—Summer 2021 (published a few weeks ago).

According to IoT Analytics’ latest LPWAN Market Report 2021–2026, the global installed base of LPWAN-enabled active devices grew 62% to 450 million during 2020 and is expected to grow a further 47% to 660 million in 2021. While deployments decelerated in most market segments during the second and third quarter (Q2 and Q3) 2020 due to both logistical difficulties caused by the lockdowns and the strategic reprioritization of budget spending, the LPWAN market recovered between Q4 2020 and the first half (H1) of 2021, aided by the sudden spike in demand for applications that help reduce the spread of the virus or improve supply chain visibility in the midst of lockdowns, travel restrictions, and shortages of hardware components.

| Definition LPWAN — what it is
Low-power wide-area networks (LPWANs or LPWA networks) are a relatively new category of wireless communication technologies designed for power-efficient, long-range, and low-cost communication from simple IoT devices. LPWAN technologies address low-end IoT applications that are often cost-sensitive and characterized by 1) infrequent transmissions of small bursts of data, 2) a large number of devices, often spread over wide areas, and 3) the need for devices to operate autonomously for many years.

This article highlights five important characteristics of the current LPWAN market that are discussed further in our report. 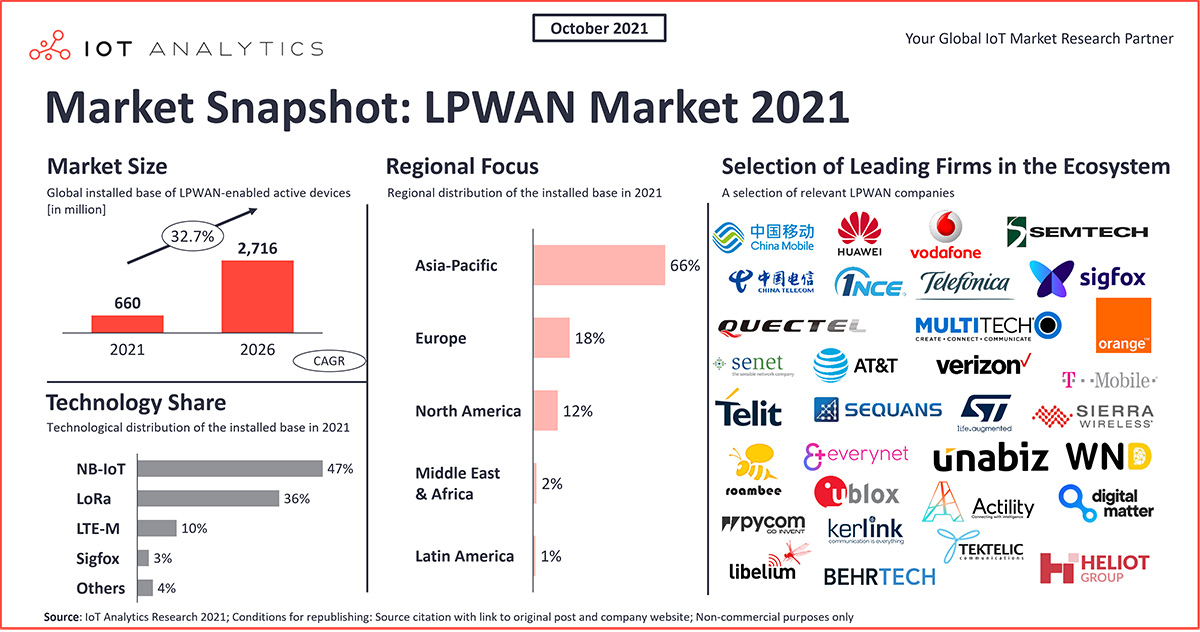 1. The LPWAN market has consolidated around four technologies.

Four technologies account for over 96% of the global installed base of LPWAN-enabled active devices: narrowband (NB)-IoT, long range (LoRa), long-term evolution for machines (LTE-M), and Sigfox. NB-IoT is leading with 47% of the global installed base, followed by LoRa with 36%. In 2019, the share of these technologies was 94% of the market, in 2021 the share has increased by a further two percentage points.

A key success factor for these four technologies has been the support of a solid ecosystem that includes most leading IoT vendors (e.g., Amazon, ARM, Cisco, Huawei, and Qualcomm) and network operators (e.g., Vodafone, Orange, and Telefonica), which has led to a wider choice of devices and solutions.

At this point, IoT Analytics expects that NB-IoT and LoRa/LoRaWAN will continue to dominate the LPWAN market in the coming five years, with LTE-M and Sigfox in distant third and fourth places, respectively. Other LPWAN technologies, such as Weightless or Ingenu’s random phase multiple access (RPMA), will continue to exist. New entrants, such as mioty (2018) or Wize (2017), are also emerging. These technologies are an attractive alternative for certain niche applications, but at this point, they do not seem poised to threaten the market leaders in the coming years.

2. China has the highest adoption, but the trade war is changing the technology mix.

Digitalization efforts in China rely on LPWAN more than those in other countries. Therefore, China is the largest adopter in the LPWAN market, and it has the highest number of deployed devices for both NB-IoT and LoRa.

Looking at NB-IoT in particular, China accounts for most of the global connections, with 80% of the total in 2020 and over 76% by the end of 2021, according to IoT Analytics’ latest estimates. However, the trade disputes between China and the US now seem to be influencing the way that LPWAN technology is being deployed globally.

On the one hand, IoT Analytics has heard of Western organizations showing reluctance in deploying NB-IoT because it is perceived as a Chinese technology (due to the heavy involvement of Huawei in its development) and thus opting for LTE-M instead. On the other hand, some IoT vendors are seeing decreased business opportunities in China and focusing more on Western markets, such as North America and Europe. Semtech, for example, stated in one of its 2021 financial earning calls that, while almost 50% of its current LoRa-related revenue comes from China (with 40% coming from Europe and North America), their opportunity pipeline suggests that 21% of potential future revenues are coming from China, and 70% are coming from Europe and the Americas.

3. Smart metering is the biggest LPWAN use case as COVID-19 response applications get a boost.

Smart metering is one of the earliest and, by far, the most-adopted use case in the LPWAN market. Several large-scale smart metering projects relying on LPWAN connectivity have been launched or completed in the past two years:

During 2020, various IoT vendors reported that they experienced an unexpected spike in demand for applications that help combat the COVID-19 pandemic, particularly for two families of use cases:

1) Use cases that involve measures to contain the spread of the virus, such as contact tracing/proximity monitoring and sanitization/cleaning management in buildings and facilities

2) Solutions that improve supply chain visibility, especially those that focus on cold chain monitoring for food and medical products

Demand for these COVID-19 solutions seems likely to remain beyond the COVID-19 emergency as companies see continued benefits and retain these solutions for future risk management.

4. Low-power satellite IoT connectivity could be a game changer in the long term.

Over the last couple of years, several new-space startups have announced the launch of novel satellite-based IoT communication systems that promise to minimize the cost and power-efficiency issues of traditional satellite systems. These new systems either utilize new IoT radio protocols or leverage existing LPWAN technologies, such as LoRa or NB-IoT, to provide direct communication between IoT devices around the world and satellites in orbit. These new setups do not require a terrestrial IoT gateway and can thus be considered part of the LPWAN market.

While most vendors offering these solutions are still at an early market phase and are engaged in pre-commercial activities, such as technology trials and satellite constellation launches, a few vendors have already launched commercial solutions, though these are often limited to select customers or specific geographical areas. Examples include Astrocast, Myriota, and Swarm Technologies (acquired by SpaceX). All of these companies launched commercial solutions in or before Q1 2021.

Our view is that the low-power satellite IoT connectivity market will take a few years to get going, since the technology is still new and unproven, and most vendors are launching their own proprietary solutions rather than agreeing on a specific standard. But the promise of ubiquitous network coverage at a fraction of the cost of traditional satellite solutions is setting the technology up for a potential market success during the second half of the 2020s or the 2030s.

5. Migration from 2G/3G to NB-IoT/LTE-M is happening, but not as quickly as mobile network operators (MNOs) had hoped.

There is a general agreement in the IoT industry that the LPWAN market will eventually cover most IoT deployments currently relying on 2G/3G technologies. This migration path will help drive the mass volumes expected for these technologies. It is already happening in China, where, for example, China Mobile has stopped adding new 2G IoT connections and started shutting off part of its 2G network to accelerate the migration to its NB-IoT network. In Argentina, MNOs have been proactive in reassigning the 2G and 3G spectrum to cellular LPWAN. In most parts of the world, however, this migration is going much slower than many in the industry had anticipated due to the fact that demand for 2G/3G IoT services still remains high, and many technology vendors and users remain reluctant to abandon these familiar and proven technologies.

This was confirmed to IoT Analytics by two of the top-10 MNOs in the world. One claimed its NB-IoT revenues in 2020 were lower than was predicted three years ago, while revenues for its 2G IoT services grew during the past three years. The other said many of its partners are still working with 2G and are reluctant to migrate to NB-IoT/LTE-M due to both coverage issues and familiarity with 2G technology.

With strong, continued double-digit growth expected, the LPWAN market remains an exciting opportunity for many players in the market and a continued opportunity for users in multiple industries to connect devices in a simple and effective way.

1. Helping those customers that are reluctant to move off 2G or 3G networks by providing them with dedicated support to migrate to NB-IoT or LTE-M (For example, Aeris has introduced the Fusion IoT Network, which facilitates switching between different technology standards)

2. Exploring synergies with satellite IoT operators to complement the terrestrial network and make the connectivity offering ubiquitous. Elon Musk stated at MWC 2021 that satellite broadband is “a nice complement to fiber and 5G,” and that Starlink has “two quite significant partnerships” with major telcos and discussions with many others. What he said about broadband connectivity also holds true for IoT connectivity.

3. Accepting that LPWAN is not a winner-takes-all market and that competition from unlicensed and licensed LPWAN technologies is here to stay. In particular, both LoRa and Sigfox have demonstrated in the past years that they are quick to react to market demands and have therefore built a sizeable customer base, despite some experts initially not putting much hope in unlicensed LPWAN in the long term.

Device makers should by now have considered LPWAN for remote connectivity due to its simplicity and maturity. Device makers should also consider direct to satellite as a new opportunity to have their devices connected in places not previously possible (e.g., at sea, in rural areas).

TREs and the IoT: Enabling a Trusted Connected Future

3 Reasons To Have Local IT Support For...

The number of connected EV charging points in...

The electronic offender monitoring market in Europe and...

January 29, 2023
Join The Exclusive Subscription Today And Get Premium Articles For Free
Your information is secure and your privacy is protected. By opting in you agree to receive emails from us. Remember that you can opt-out any time, we hate spam too!